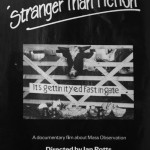 Join guest speaker and Director Ian Potts for a Q&A and introduction to ‘Stranger than Fiction’ (1985); a film about Bolton’s Mass Observation project in the late 1930s. The talk will be followed by a screening of the film itself. The event starts at 5.30 pm tomorrow, Thursday 22 November. Refreshments will be served. 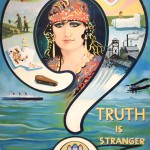 This painting was done by Walter Kershaw originally for the film “Stranger than Fiction” in around 1985. Kershaw is mural painter, from Rochdale, known for his large scale paintings. The painting is based on this photograph by Humphrey Spender, which we have been using in promotional material for the Worktown 75th Birthday exhibition at Bolton […] 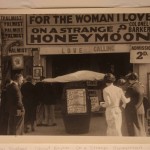 Colonel Barker by Humphrey Spender (copyright Bolton MBC) The sideshow featured Colonel Barker in bed in a pit separated from a woman wearing a nightdress in an another bed by a row of belisha beacons. Scandal loving tourists could view the scene from above, and rain insults down on the unfortunate couple. Although the advertising […]