Humphrey Spender wrote an account of his confrontation with the landlord of the Saddle Hotel on 22 January 1938.

The landlord was upset when he spotted Spender taking photographs and insisted on calling a policeman. 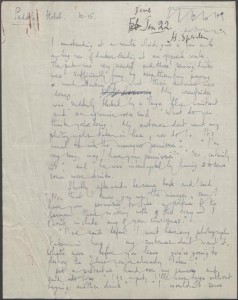 I was standing at a counter which gave a view onto a long row of drinkers standing at an opposite counter The pub was very crowded and those serving drinks were sufficiently busy to keep them from paying much attention to what their customers were doing My viewfinder was suddenly blocked by a large blue waistcoat and an aggressive voice said, ‘What do you think you’re doing. My customers don’t want any photographs taken in here, nor do I. Its usual to ask the manager’s permission.’ ’I’m very sorry, may I have your permission?’ ’No, certainly not’, and he was interrupted by having to serve some more drinks.

Shortly afterwards he came back and I said, ’Now that I know you are the manager, can I have your permission to take a picture of the barman there, waiting with the tray- I shan’t include any of your customers.’

‘I’ve said before I won’t have any photographs taken in here; my customers don’t want it. What’s more, before you leave you’re going to destroy the films you’ve already taken.’

I put a protective hand over my camera, and said, ‘It’s a pity I’ll have to go without buying another drink.’ ’I wouldn’t serve you. 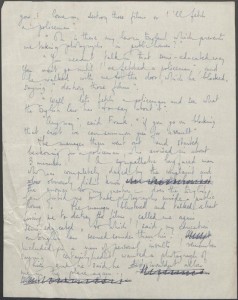 Come on, destroy those films or I’ll fetch a policeman.’

‘Oh, is there any law in England which prevents me taking photographs in public houses?’

‘You needn’t talk in that semi-educated way you won’t go until I’ve fetched a policeman,’ and he walked with me to the door, which he blocked, saying, ’destroy those films’.

‘Well, let’s fetch a policeman and see what the English law has to say about it.’

‘Anyway,’ said Frank, ’if you go on blocking that exit we can summon you for assault.’

The manager then went out and started beckoning for a policeman, who arrived in about 3 minutes. A sympathetic longfaced man who was completely dazed by the complaint and obviously didn’t know the answer to my question- does the English law forbid me to take photographs inside a public house. The manager blustered and talked about forcing me to destroy the films, called me again semi-educated, to which I said my education on English law seemed sounder than his. Included in a mass of personal insults I remember saying I certainly hadn’t wanted a photograph of him and he said he wouldn’t allow me in the place again. 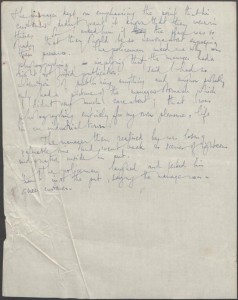 The manager kept on emphasising the point that his customers didn’t want it known that they were in there. So I asked him if the place was so shady that they should be so nervous about exposing their presence. The policeman asked me why I was photographing, implying that the manager had a right to forbid publication. I said I had no intention of publishing anything and anyhow only had a picture of the manager’s stomach which I didn’t very much care about; that I was photographing entirely for my own pleasure, life in an industrial town.

The manager then realised he was losing valuable time and went back to scenes of righteous indignation inside his pub.