Humphrey Spender wrote an amusing observation describing his encounter with lady canvassers at the Conservative Club during the Farnworth by-election.

Can you match people in the photographs to his descriptions? 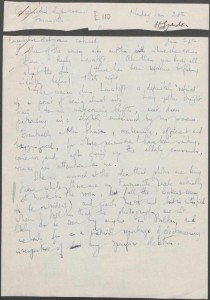 One of the women asks another with where she comes from. Reply Lowestoft. Ah then you know all about the fish (there has been reference to the fishing industry before) That’s right.

The woman from Lowestoft is definitely ‘refined’ to a point of being almost arty. Long yellow straight hair, to an unbecoming length, neat dress, patronising air: slightly embarrassed by my presence. Eventually a Miss Johnson, overbearing, efficient, and baggy-faced, for whose permission I have been waiting comes in, and after firing up the elderly canvasser, turns her attention on me.

She is worried at the idea that photos are being taken while there are no Farnworth people actually at work in the room, but (all the workers seem to be outsiders) and wants me to wait, but is satisfied when I tell her that the photographs are not likely to be seen by anybody in Bolton, and are only for a pictorial reportage irrespective of elect any specific election.